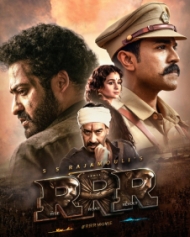 RRR's story opens in Adilabad, where a young tribal girl is forcefully taken away from her mother by a few British soldiers. Komaram Bheem (Jr NTR), the tribe's leader sets out on a journey in search of the lass. Alluri Sitarama Raju (Ram Charan), one of the police officers working for the British, on a tip-off about Bheem's mission and his plan to murder the governor, decides to take up the task of finishing him off. However, things take an unexpected turn, when the foes turn good friends with time and together fight against the British Raj and Nizam of Hyderabad.

Producer DVV Danayya confirmed the budget for the RRR movie is ₹550 crores.

RRR movie's first press meet was held on March 14th at 11:30 AM. RRR run time is 3 hours and 2 minutes. Censor Board gave U/A certificate. RRR movie released on March 25, 2022, in Telugu along with the dubbed versions in Hindi, Tamil, Malayalam, Kannada, and other Indian and foreign languages.

ZEE5 bagged the ott rights and started streaming in Telugu, Tamil, Malayalam, and Kannada versions from May 20, 2022. The Hindi version was brought by Netflix. Zee Network has acquired the satellite rights of RRR Hindi while Star India Network has bought the rights to RRR's Telugu, Tamil, Malayalam, and Kannada versions. On July 26, 2022, the RRR movie started to Stream on Disney Plus Hotstar.