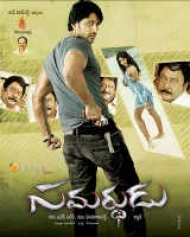 Drama
Release Date : 18 Sep 2009
Cast : Raja, Sanjjanaa Galrani
Director : Arjun Reddy
Synopsis
Samardhudu is action oriented movie in which, J.K (Krishnam Raju) is playing a role of  MLA, who is honest and kindhearted for his people so another party leader (Jayaprakash Reddy) wants to became MLA, but in this situation he wants to kill J.K because he cannot sucessed by participating with J.K.

Jayaprakash Reddy gives a deal to a profestional killer Raja. The rest of the story deals how Raja plans to finish of J.K and whether he sucessed or not