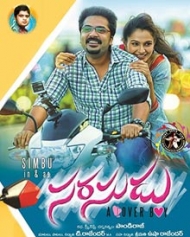 Produced by T. Rajender and featuring music by Kuralarasan, the film has been in production since 2013.

Simbu plays an IT professional, who takes us into his past to unravel his first love and the heartbreak he goes through thereafter.

He begins his life afresh with Nayanthara and hopes for a better luck when it comes to his love life, second time around. But, how difficult is it to move on in one's life?

Sarasudu is about a married couple...