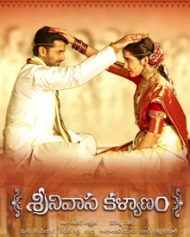 Srinivasa Kalyanam movie is a romantic entertainer directed by Vegesna Satish and produced by Dil Raju while Mickey J Meyer scored music for this movie.

Nithin, Raashi Khanna and Nanditha Swetha are played the main lead roles in this movie.

Vasu (Nithiin) meets Sreedevi (Raashi Khanna) who falls in love after a couple of sequences into the movie. While Vasu is a staunch believer of family values like his grandmother (Jayasudha), Raashi's father, RK (Prakash Raj), a rich and a flamboyant entrepreneur, contradicts with the ideology and is not attached to family emotions and its values.

Both, Vasu and Raj, reach a stage of agreement into marriage but with a condition each from either ends, which will be kept under wraps from the family...