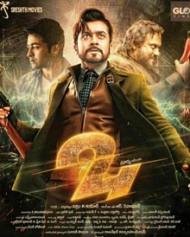 A R Rahman scored music for this movie.

‘24’ is the story of a watch, with which the owner can travel to the past and future and control the time.

Shiva Kumara (Suriya) is a brilliant scientist who creates a watch that could manipulate time. He calls it Project 24. However, his twin brother Athreya (Suriya, again), a dreaded don, wants the watch for himself, and therefore attacks his brother, killing his wife in the process.

Shiva escapes with his infant baby, with the villain close on his heels. Knowing...