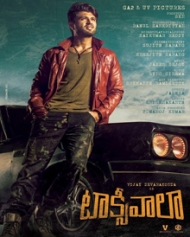 Vijay Deverakonda, Priyanka Jawalkar and Malvika Nair are playing the main lead roles in this movie.

Siva (Vijay Devarakonda) comes to Hyderabad in quest of a new life and job where he sees himself in engaging in odd jobs. Finally, he decides to settle down as a cab driver and thus, lays his hand on a used contessa car which will be funded by his Vadina. Siva, gives the vintage car a modern classy look and in parallel, lead a happy life with his Anna and Vadina.

He meets Anu (Priyanka Jawalkar) and as expected, falls in love with her way too quickly. It's now that the story unfolds. Siva notices weird things happening in his car and in sometime, its realized that the car is haunted. He tries to get rid of the car but in vain, as the car comes back to him.

On November 7th, before release of the film, a 45-minute clip of the film got leaked by the piracy website Tamil Rockers. The police immediately took action and the culprits who had leaked the film were arrested.