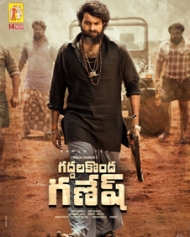 Gaddalakonda Ganesh is a remake version of Tamil blockbuster movie Jigarthanda and it is a gangster comedy entertainer directed by Harish Shankar and produced by Achanta Ramu, Achanta Gopinath under 14 Reels Plus banner. The movie cast includes Varun Tej, Atharvaa Murali and Pooja Hegde while Mickey J Meyer scored music.

Gaddalakonda Ganesh revolves around an assistant director who decides to make a film about a real-life gangster only to realise that it is not going to a cakewalk. The film highlights the problems that crop up when the filmmaker tries to do some basic research about his 'subject' and his fellow thugs.

On 19 September 2019, just before release, the film's title was altered due to objections from the...