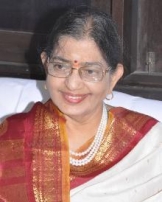 P. Susheela, or Pulapaka Susheela, is an Indian playback singer. She has recorded several songs in many South Indian languages, including Telugu, Malayalam, Tamil, and Kannada.

She is one of the greatest singers in the Indian cinema. Her career spanned for more than four decades.

In 1950, music director Pendyala Nageswara Rao was looking for new talent and scouted for new singers at All India Radio. Of the five people referred, Susheela was selected and sang her first song, a duet with A. M. Raja - 'Edhukku azhaithaai' for the movie.

Susheela made her entry when the competition was intense. But her entry in 1952 outshone others and soon pushed all of them to the background. Right from 1955, she was very popular and almost all the movies had a song sung by her. It was the legendary Saluru Rajeswara Rao, who spruced up her voice culture and gave her challenging assignments, especially involving veena in his music direction.

She rendered several memorable songs under the legend K. V. Mahadevan and under the expert baton of M. S. Viswanathan in all south Indian languages.

P. Susheela. The very name would evoke memories of many a number rendered in her rich, reverberating and resonant voice to the fans of South Indian movies, be it Tamil, Telugu, Malayalam, Kannada or even Sinhalese. With her mellifluous voice, she has breathed life into thousands of lyrics, bringing out the right emotion lying under each word and making the song waft straight into the listener's heart.

A point to be noted here is the care with which she pronounced the words, though she sang in different languages. That is something we are not able to see in most of our present-day singers. Words are the victims of rather constricted rhythms and contorted beats, compacted and deformed between the tongue and the teeth. But it was Susheela's school to render them with effortless ease, as they are pronounced by the people speaking each individual language, in which the lyrics are written.

'Petra Thaai' was being made in 1952 in Tamil (Kanna Thalli in Telugu) with A. Nageswararao and G. Varalakshmi in lead roles. Susheela sang her first song - a duet with A. M. Raja - 'Edhukku azhaithaai' for the movie.

She was then an employee of the AVM Studios, receiving a fixed amount as her monthly salary, for several years after her introduction in Petra Thaai. Meyyappa Chettiar, the demanding perfectionist that he was, appointed a Tamil teacher for Susheela to train her in proper pronunciation of words.

The songs that she sung in 'Kanavane kan kanda dheiyvam' (1955) brought her the popularity that she so well deserved. Especially songs like 'Endhan ullam thulli vilyaaduvadhum,' 'unnaik kan thedudhe' brought out her talent for rendition. Then came 'Missiyamma' in the same year. Susheela became very popular with 'Brindha vanamum Nandha kumaranum' and 'ariyaa paruvamada' set to Karaharapriya. Her name soon spread and was respected among the elite and the masses.

It was a time when several other women had established their talents already and were reigning supreme - like P. Leela who started her career in 1948; Jikki who allured the audience with her lilting voice; the Carnatic music genius M. L. Vasanthakumari; P. A. Periyanaayagi, actress and singer; Jamuna Rani, A. P. Komala; R. Balasaraswati, Sulamangalam Rajalakshmi and Jayalakshmi, K. Rani, A. Rathnamala, S. J. Kantha among others. Each had a unique and distinct character and quality and had a large number of admirers.

Susheela made her entry when so many singers were displaying their talents and were very popular. But her entry in 1952 outshone others and soon pushed all of them to the background. Right from 1955 there was not a single movie - for a very very long time - that did not have a song in her voice. Her career was at its best in the 60s and the early 70s. Whoever be the music director, whoever be the lyricist, whoever be the co-singer, the song became popular with her finesse. Her popularity among the masses was just unprecedented in the annals of Tamil cinema.

After her splendid performance in Kalyana Parisu, melody itself assumed a new dimension and soon a trend was set in motion that placed equal emphasis on songs on par with story, scenes and sequence. Susheela's contribution to this trend was considerable. She has given hundreds of golden melodies under the direction of stalwarts Viswanathan - Ramamurthy. She continues to rule supreme in the hearts of her fans through the thousands of numbers she has rendered in a very long and enviable career.