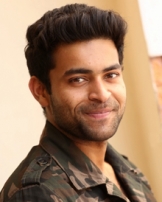 Varun Tej Konidela is the son of actor and producer Nagendra Babu. He is the nephew of actors Chiranjeevi and Pawan Kalyan and has a younger sister, Niharika Konidela. His cousins Ram Charan, Allu Arjun, and Sai Dharam Tej are also actors in Tollywood.

He made his debut as a hero in Srikanth Addala's Mukunda movie, opposite Pooja Hegde. In Kanche, he portrayed Dhupati Haribabu, the grandson of a poor barber, who falls in love with Seethadevi and later goes on to fight in World War II. "Kanche," directed by Krish, was critically appreciated by critics and also a commercial success.

Pragya Jaiswal acted as his female lead. His third film, Loafer, was released on December 18 and directed by Puri Jagannath. The movie Fidaa, in which he played an NRI who falls in love with a country belle, was released in the second half of 2017.

The movie was a financial hit, earning over 90 crores at the box office.  Tholi Prema, his 2018 release, did well at the box office, and Tej received praise for his portrayal of an impetuous young guy in the role.

Antariksham 9000 KMPH, a space thriller directed by Sankalp Reddy, was his next movie that year. F2: Fun and Frustration, a multistarrer with Venkatesh, Tamannaah, and Mehreen Pirzada, was Tej's first release of 2019 and a great box office success.

He created a Telugu translation of Aladdin's voice for the film Aladdin. Later, he had an appearance in the Tamil film Jigarthanda adaptation of Gaddalakonda Ganesh, directed by Harish Shankar, and financial success.