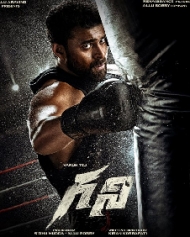 Ghani is a sports backdrop boxing movie directed by Kiran Korrapati. The movie casts Varun Tej, Saiee Manjrekar, Upendra, Sunil Shetty, and Naveen Chandra are in the lead roles. The Music is composed by Thaman S while cinematography is done by George C. Williams and it is edited by Marthand K. Venkatesh. The film is produced by Allu Venkatesh and Sidhu Mudda under the Renaissance Pictures banner