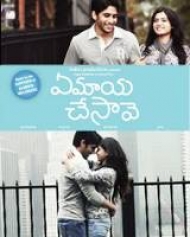 Sanjay Swaroop is producing this flick under Indira Productions banner. The musical scores are provided by the great musician AR Rahman and the music was released on February 3rd through Sony Music Company.

Ye maaya Chesave is a beautiful love story. It’s a common phenomenon that one has to connect with love at one point of time in his life.

The story of the film is, Hero Nag Chaitanya was to foray into films and become a good director. But his father rejects his plea.

After completing engineering, Krishnudu introduces him to Puri Jagannath where he joins as an Assistant Director. And there you go, he finally falls in love.

The main plot of the movie is known to be that, hero and heroine are in love that is routine but the element of innovativeness is that heroine is elder to hero and that is the reason their love has to face some problems in the society. Hero is 22 years and Heroine is 24 years old in that movie.