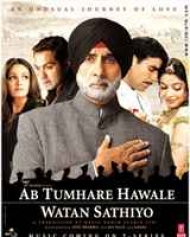 U | War
Release Date : 24 Dec 2004
Cast : Amitabh Bachchan, Bobby Deol
Director : Anil Sharma
Synopsis
Ab Tumhare Hawale Watan Sathiyo is about 1971 during the Indo-Pak war and the formation of Bangladesh, Lt. Commander Vikramjeet Singh has a ship in his command and a regiment of soldiers of the Indian Army, commandeered by his dad, Major General Amarjeet Singh.

The ship comes under attack by a submarine of the Pakistani Navy, undergoes damage, and sinks along with Vikramjeet, but not before he courageously rescues about a hundred of trapped army soldiers.

Years later, Vikramjeet's son Kunaljeet joins the army as a Captain, but he lacks the values his dad and grandfather had in them about serving the country selflessly. He just wants to be employed with the army for a couple of years, then re-locate to the U.S., run a business, and make lots of money.