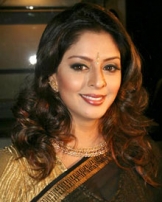 Nandita Morarji or Narmatha Sadanah better known as Nagma (Hindi: नघमा; Tamil: நக்மா), is an Indian actress of Bollywood, Tollywood and Kollywood. At her peak in the 1990s, she "dominated Tamil cinema," to quote The Hindu. Born of a Muslim mother and a Hindu father on Christmas Day.

She began her acting career in Bollywood and acted in a few movies but shifted south where she met with greater success before returning to Mumbai. Although sometimes listed in film credits as Naghma, she should not to be confused with an earlier actress who went by the same stage name - that mistake is made in her listing on the Internet Movie Database website.

Personal life and education
Nagma's biological father was Sri Arvind Pratapsinh Morarji, the late textile magnate. Her mother is Seema Sadhana, who married Morarji in 1972, separating only "a few years later," as The Telegraph reported in 2006 when Nagma made the information public.

According to Nagma's passport, the name given to her at birth was Nandita, and it is by that name that she was referred to in an obituary printed by the family when her father, Arvind Morarji, died.

After divorcing Morarji "due to some family problems," Nagma's mother later married Chander Sadanah, a film producer, with whom she had two other daughters, Jyothika (herself a major Kollywood star) and Radhika, who also acted in a Tamil movie, as well as a son named Suraj. Through her biological father, who later re-married, Nagma has two more half-brothers, Dhanraj and Yuvraj.

Nagma remained close to her biological father up until his death on 1 January 2006. She explained to one Mumbai reporter that: "I am proud of the fact that I belong to the respectable Dharamsinh Morarji family. My mother was legally married to Arvind Morarji at a public function at Radio Club at Colaba."

It was Nagma's mother who encouraged her to become an actress, and is said to have been her "constant companion on the film sets" for several years. In the spirit of her father's background in textiles, Nagma herself now has a clothing boutique on Mumbai's Hill Road called Nagma's, which was inaugurated in September 2003 by Akshay Kumar.

Nagma has led a very different life from her half-sister Jyothika, who was not successful as a star in Bollywood but who found major success in Tamil movies. Unlike Nagma, Jyothika's public image is free of controversies.

Nagma herself, while romantically linked to a number of men, is single. She told Mid-Day in 2006 that "I am not hell-bent on getting married. ... Unless you are dead sure about your guy, you shouldn't get married. ... Marriage is an institution I would like to get into, but only if I find the perfect man.".In June 2008, Nagma revealed about her Christian Faith at a prayer meeting for film artistes in Chennai.

Nagma had considerable success with her 1990 hit debut film Baaghi: A Rebel for Love, co-starring Salman Khan; she was 16 at the time. Along with Karisma Kapoor, she was also one of the female leads in 1994's Suhaag which also featured Akshay Kumar and Ajay Devgan. Despite this initial success, she moved south to star in Telugu and Tamil movies at the behest of her friend Divya Bharti.

Later explaining her shift south, she cited not only what she considers the higher quality of the work, but also stated that "I did what was best then! I was a girl with a Muslim name and the Shiv Sena was slowly raising its head." She became a major star in the south and remained so for much of the 1990s, at least until 1997, and reportedly had a temple dedicated to her by fans in Tamil Nadu.

Her major hits in Telugu include 1993's Gharana Mogudu with Chiranjeevi, Allari alludu with Nagarjuna and Major Chandrakanth with NTR and Mohan Babu. Her main Tamil hits were Baasha with superstar Rajnikanth and 1994's Kadhalan with Prabhu Deva.

In 1995, Kadhalan is said to have become the first Tamil movie to be dubbed into Hindi, in which it was renamed Hum Se Hai Muqabala. During this period she was rumored to have been involved in a relationship with Tamil actor Sarath Kumar -->, who was in significant debt at that time. Most of her performances in this era were glamour oriented.

Following alleged death threats by Sarath Kumar, and as her southern movie career was stalled by type-casting, she moved back to Mumbai. In an interview in 2001, she is reported to have said "The pressure of being the number one actress in Tamil cinema was getting to me. I was unhappy with the kind of films I was doing.

I couldn't do the kind of work I wanted to because I had to go by the dictates of what the audience expected of a much-in-demand actress. I was stagnating so I decided to take a break.". Again based in Bollywood, she focused on supporting roles in major hits such as 2000's Chal Mere Bhai, which reunited her with former costars Karisma Kapoor, Salman Khan and Sanjay Dutt.

Media reports in 2001 linked her romantically with cricketer Khiche Khan, although both denied the story. The same controversy happened between Nagma and Souvrav Ganguly.  Within a year, Nagma enrolled in the spriritually-oriented Art of Living course, eventually teaching it herself in Mumbai and elsewhere. While based in Mumbai, she continued to worked in some Telugu and Tamil movies, such as Allari Ramudu and Citizen, playing significant supporting roles, as well as taking leading roles in some Malayalam films.

Nagma was "a prominent campaigner for the Congress party... on the election trail for the party in Bihar and Jharkhand." She is quoted on the front page of the Telegraph as asking at the time "Why were the reports made public when I have just returned from successful political campaigning in Jharkhand?"

Nagma is currently a major star in Bhojpuri movies, where she has again found success as a leading lady. She was notably successful when paired against the "Big Boss" reality show participant Ravi Kishan, with whom she was also linked romantically in real life Called by some "the Madhuri Dixit of Bhojpuri cinema," she won a Best Actress award at the 2005 Bhojpuri Film Awards for her performance in Dulha Milal Dildar.

In 2006's Ganga, she starred as Ganga opposite Amitabh Bachchan and Hema Malini. When asked why she shifted to Bhojpuri films, she stated that "I wanted to do films in different languages. I have already done movies in 10 languages.

My first Bhojpuri film 'Panditji Bataayina Biyaah Kab Hoii' was a huge hit. After that the offers poured in and they were too good to be ignored." When interviewed by The Hindu in Delhi in April 2007, she also indicated that another important reason for her decision to focus on Bhojpuri films was to help with her political campaigning.

In 2006, she made her Punjabi film debut, starring alongside Raj Babbar in Ek Jind Ek Jaan.

Discussing her career in a Mid-Day interview in September 2006, Nagma is quoted as saying: "I have learnt nine languages, so I want to do films in all languages. ... On the Hindi film front, I am in the process of signing a very big period thriller.

I am getting to do a variety of roles with content, so I am satisfied." While noting her commitment to complete several Bhojpuri films she is currently involved with, in March 2007, she expressed her intention to next focus on returning to Hindi films after wrapping up her current projects.

In her 2007 Hindustan Times interview, in which she discusses her future plans for cinema and politics, Nagma responded to a question about her reputation for controversy by saying: "You need guts to deal with controversies. Of course, whether it’s for negative or positive reasons, I’ve always been in the news."

She had only formally become a member of the Congress Party in Hyderabad earlier that same month, reportedly citing its 'commitment towards secularism and welfare of the poor and weaker sections' as her reason for joining.

She is said to have been earlier courted by the Bharatiya Janata Party (BJP), which an Indo-Asian News Service report said "had even indicated that she might be fielded [as a BJP candidate] from Hyderabad" in the same election. Nagma has elsewhere been cited as saying that she first supported the Congress Party because of her admiration for Rajiv Gandhi.

In a 2006 interview, aptly titled "Nagma the Survivor," she made a direct link between her family history and her political activism: "My mom is Muslim and my dad is Hindu. We were brought up to respect all religions. Communal riots pained me.

I wanted to do something. So I joined politics." In the same interview, she also notes that she turned down an offer to run for India's Lok Sabha because of her film career: "If I wanted to become a member of Parliament I would need to give 100 per cent to my constituency -- which I could not at that point of timeHowever, in an interview with the Hindustan Times in 2007, she said "politics will continue and so will my acting.

Mind you, I’m an actress first. I want to act till my dying day." Interestingly, her last lead role in a major Bollywood film was opposite fellow Congress Party member and now M.P. Govinda, who continues to film movies while a member of the Lok Sabha.

Perhaps mindful of her nascent political career, Nagma has said that she medidates daily and considers herself to be "a very God-loving person." In line with her own family's mixed religious background, she has stated that she has read the Qur'an, Bhagavad Gita, and Bible.