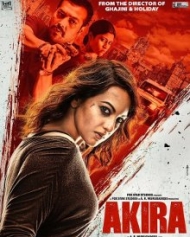 2 hrs 42 mins | Action Drama
Release Date : 02 Sep 2016
Cast : Sonakshi Sinha, Anurag Kashyap
Director : A.R. Murugadoss
Synopsis
The story initially, revolves around the life of a hot-head Kumari Akira Sharma (Sonakshi Sinha), who always find it difficult to adjust herself with the society. Owing to her over-aggressive nature, her mother and brother convince her to pursue her higher studies away from her hometown, Jodhpur.

That's how Akira Sharma lands up in Mumbai. For her, controlling anger is next to impossible; and even there, she picks a fight with her hostelmates and ends up in major trouble.

Meanwhile, there is one more character in the film, around the whom the plot of the story revolves. It's the corrupt Police Officer played by Anurag Kashyap, who witnesses an accident along with his Sub-Inspector.

When he is about to take the victim to a nearby hospital, he comes...