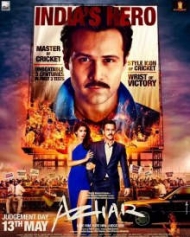 As early as June 2013, producer Ekta Kapoor had spoken of her plans and signed a contract with cricketer Mohammad Azharuddin to make this film based on certain well known and highly talked about incidents and facts of Azharrudin's life. At that time actors Saif Ali Khan, Ranbir Kapoor, and Ranveer Singh were on her wish list. Azharuddin was quizzical over the film until after he had read a copy of...