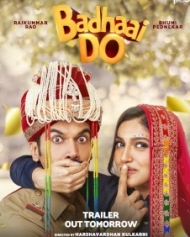 Badhaai Do is a sequel to Badhaai Ho, starring  Rajkummar Rao and Bhumi Pednekar in the lead roles. The trailer revolves around a marital setting between Rajkummar and Bhumi, only to know that there are a lot of secrets between these two to unfold. Badhaai Do also stars Seema Pahwa, Sheeba Chadha, Chum Darang, Lovleen Mishra, Nitish Pandey, and Shashi Bhushan amongst others in pivotal roles.
Story
After an unsuccessful attempt by his family to fix his marriage alliance, Shardul Thakur (Rajkummar Rao), a cop comes across Sumi Singh (Bhumi Pednekar), a physical education teacher when the latter lands at his police station to register a complaint against a catfisher. After a few light-hearted situations, the duo ends up getting hitched.
While their respective families are elated to see their kids finally settling down, there's a catch! Shardul and Sumi are closet members of the gay and lesbian community and have knowingly agreed to a marriage of convenience.
As the newly married couple walks on eggshells to keep their secret hidden from the world, Sumi falls in love with a pathologist Rimjhim (Chum Darang). Soon, the latter moves in with Shardul and Sumi. Meanwhile, Shardul's relationship with his partner Kabir hits a roadblock. What follows next is a series of comical errors which ultimately lead to a heartwarming message.
Release Date
Badhaai Do movie released on 11 February 2022.