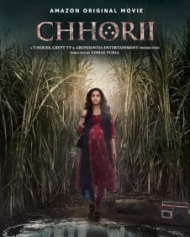 Chhorii is a 2021 Bollywood horror-drama, helmed by Vishal Furia. The movie star Nushrat Bharucha and Usha Naik  in the lead roles. Chhorii is an official remake of Vishal Furia's 2017 Marathi movie 'Lapachhap'. The movie depicts the story of Eight-month pregnant Sakshi, who need to save her unborn child from the evil within society.

Chhorii has its screenplay written by Vishal Furia and Vishal Kapoor. The movie is produced by Bhushan Kumar, Krishan Kumar, Vikram Malhotra, Jack Davis, Shikhaa Sharma and Shiv Chanana under the banner of Abundantia Entertainment, Crypt TV, T-Series and A Pshych Film. Chhorii will release on Amazon Prime Video on 26 November 2021.

When financial woes come knocking at Hemant (Saurabh Goyal) and his eight-months pregnant wife Sakshi (Nushrrat Bharrucha)'s door, the couple is forced to flee from the city for a few days. That's when their faithful driver Kajla (Rajesh Jias) comes to their rescue and offers to give them refuge at his house which is situated at the centre of an enormous sugarcane plantation faraway from the city. There, Kajla's wife Bhanno Devi (Mita Vashisht) agrees to take care of Sakshi.

However unknown to Sakshi and Hemant, there are some paranormal forces lurking around the house and the fields. Soon, Sakshi encounters three kids who are always running around the place with a women clad in a red sari playing hide-and-seek with them. To add more to it, a mysterious radio with a lullaby playing on it appears and disappears frequently which causes Sakshi to think that there's more to the place than meets the eye.