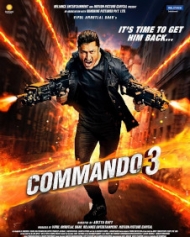 Commando 3' begins with the cops chasing down a group of misled youth, who are prepping for a massive terrorist attack on the country under the influence of a masked radical. In a bid to avert this destructive plan, the bureau ropes in Karanveer Singh Dogra (Vidyut Jammwal) and Bhawna Reddy (Adah Sharma). The early investigations lead the duo to London where the mastermind of this attack is probably hiding. There, Karanveer and Bhavana receive help from their British counterpart Mallika Sood (Angira Dhar). Will Karan and Co. nab down the culprit before it's too late?