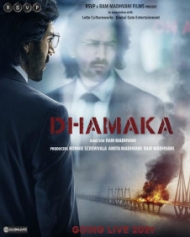 Drama
Release Date : 05 Jul 2021
Cast : Kartik Aaryan,
Director : Ram Madhvani
Synopsis
Dhamaka is an upcoming Bollywood drama film, which is directing by Ram Madhvani. The film is produced by Ronnie Screwvala, Amita Madhwani and Ram Madhwani. The cast of the film includes Karthik Aryan in lead role.
story
The film is a remake of the Korean film Terror Live and Karthik will play the role of a journalist in the film. But this journalist's life changes when he covers the live broadcast of the Mumbai terror attack.