X
#Filmibeat: Best Of 2018. Hurry up & vote!
Vote Now!
Home» Bollywood»Movies»Gabbar Is Back 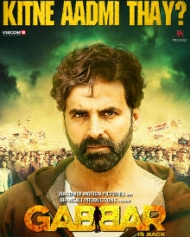 Gabbar Is Back movie is an official remake of the 2002 critically and commercially successful Tamil A. R. Murugadoss film Ramana.

It was later remade in Telugu as Tagore and then in Kannada as Vishnu Sena.

Story in detail:
There's no one more dangerous than a common man on a death wish. This is one such story of a man remorselessly wronged by the establishment. One freak incident results in everything he held dear taken away from him. Predictably, the system doesn't seem to care — let alone resolve.

Gabbar Is Back: Critics Reviews

Gabbar Is Back: User Reviews