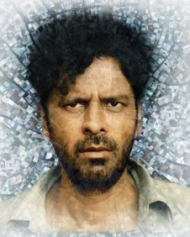 The movie depicts the story of a man, who find himself trapped in the city walls. Kai Miedendorp has wielded the camera for Gali Guleiyan.