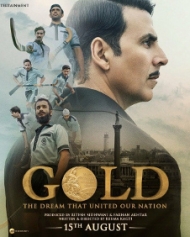 Gold is a fictional story, mixed with true incidents about India winning their first gold medal at the 1948 Summer Olympics in field hockey (11 field players). The movie is produced by Ritesh Sidhwani & Farhan Akhtar under the banner Excel Entertainment.

Gold opens in 1936 Olympics in Berlin. Nope, Akshay Kumar's Tapan Das isn't the star player on the hockey field. Instead, he's the 'hey you' of the British India's national hockey team. When the boys win the match and stand on the podium to receive the medal, Tapan who is the team's manager vows with a hand on the...