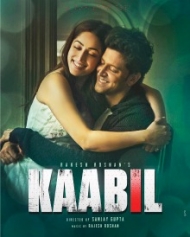 Kaabil is a Bollywood revenge drama movie of 2017, from the director Sanjay Gupta. The movie stars Hrithik Roshan & Yami Gautham in lead roles.

Kaabil features an intense love story between two blind lovers (played by Hrithik Roshan and Yami Gautam). They are married and lead a happy life until one day, a terrible tragedy stike his life. His wife will be brutally raped and murdered by group of hooligans. How he fights back against them form the plot of Kaabil.

It is for the first time Hrithik sharing screenspace with Yami for a movie.

The film score and soundtrack are composed by Rajesh Roshan.

Kaabil all set to hit the theatres on January 25.