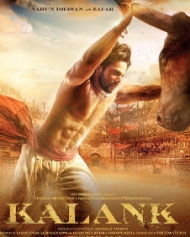 Kalank is a 2019 Bollywood drama, written & directed by Abhishek Varman. The movie stars Madhuri Dixit, Sonakshi Sinha, Alia Bhatt, Varun Dhawan, Aditya Roy Kapur, Sanjay Dutt etc., in the lead roles. Set in the pre-partition period in Husnabad in outskirts of Lahore, Roop (Alia Bhatt), a young, carefree girl gets married to Dev (Aditya Roy Kapur) while his wife Satya (Sonakshi Sinha) emotionally watches the nuptial with the patriach of their house, Dev Chaudhary (Sanjay Dutt). At the same time in the same town in a place called Hira Mandi, a koel-eyed blacksmith named Zafar (Varun Dhawan) dances 'First Class' with exuberance  outside Begum Bahar (Madhuri Dixit)'s chamber, unware of how his fate is all set to change forever.

Check: What In Store For Kalank
As forbidden romance seeps in with Roop-Zafar's love-story, Balraj and Begum Bahar too are forced to confront their past which threatens to tear their present apart along with the dangling danger of the partition.

Kalank is produced by Karan Johar, Sajid Nadiadwala, Hiroo Yash Johar & Apoorva Mehta under the banner Dharma Productions & Nadiadwala Grandsons Entertainment Pvt.Ltd. The movie is all set to hit the theatres on April 17, 2019. The movie has its editing done by Shweta Venkat Mathew and Binod Pradhan has wielded the camera for Kalank. The music of the film is composed by Pritam, Sanchit Balhara and Ankit Balhara. Overall, the movie has four songs.