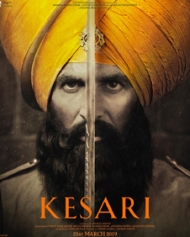 Kesari is a Bollywood war-drama, which is based on one of the bravest battles fought in India 'The Battle Of Saragarhi'. The movie stars Akshay Kumar as Havildar Ishar Singh and Parineeti Chopra in the lead roles. Kesari is produced by Karan Johar, Aruna Bhatia, Hiroo Yash Johar, Apoorva Mehta and Sunir Khetarpal under the banner Dharma Productions, Cape of Good Films, Azure Entertainment and Zee Studios Pvt.Ltd. and is distributed by Zee Studios Pvt.Ltd.

The movie has its screenplay written by Girish Kohli and Anurag Singh. Anshul Choubey has weilded the camera for Kesari.
Plot Line
Kesari is about the story of Havildar Ishar Singh who participates in the Battle of Saragarhi (in which an army of 21 Sikhs fought against 10,000 Afghans in 1897) while yearning for the respect of his estranged daughter.
Set in 1897, Kesari begins with British Indian army Havildar Ishar Singh (Akshay Kumar) getting into a confrontation with a few Afghans after they attempt to kill a woman. When Singh disobeys his British superiors, he gets transferred to the sleepy fort of Saragarhi where he is in-charge of  a battalion of 21 from the 36 Sikh regiment. Soon, the Afghans decide to attack their fort. However, the 21 Sikhs led by Ishar Singh refuse to retreat and choose martyrdom instead.