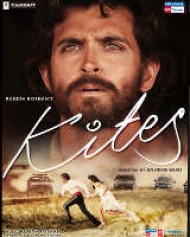 Kites movie has a unique storyline and a dance based romance thriller. Its a bi-lingual film(English and Hindi). Its a language independent film. Its a story of love, dance, action and persecution. The film is like a poetic story and based on chronological events that take place in the character's lives. It has a lot of Adventure. Barbara's name is "Natasha" in the film, and Kangana's name is "Gina". Hrithik is "J".

Hrithik's role is that of a Las vegas boy who can defraud anyone. Like a scamster. Barbara's role is that of a hot latino dancer who falls in love with the protagonist. Its an intercultural romance. The romance between them, urge them to elope and soon follows their persecution.

In the harsh terrain of the Mexican desert, a mortally wounded man is left for dead in the heat of the desert sun. This is J (Hrithik Roshan) - once a street smart, carefree, young guy and now a wanted man.

The only thing that keeps him alive is the quest to find the love of his life, Natasha (Barbara Mori). A woman, engaged to another man, but surely destined for J. A woman, who comes into his life like a bolt of lightning, and changes it forever.

Kites is a story of love that goes beyond barriers, boundaries and cultures. It is a story of passion that defies every rule, of a relationship that takes two lovers on a thrilling journey filled with precious moments and unexpected betrayal.