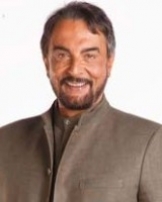 Kabir Bedi is an Indian international actor who began his career in Bollywood, worked in Hollywood, and became a star in Europe.

Early life
Kabir Bedi was one of three children that was born into a Punjabi family in India, that had devoted itself to India's fight for independence from British colonial rule. His mother, Freda Bedi, later converted to Tibetan Buddhism. His father, Baba Phyare Lal Bedi, was an author and philosopher. Kabir went to school at Sherwood College, Nainital.

Career
Kabir Bedi is an international actor from India who has originated from Bollywood, worked in Hollywood, and become a big star in Europe.

In the James Bond film Octopussy, he played the villain Gobinda who battled Roger Moore from start to finish.

In Europe, his greatest success was Sandokan, the saga of a romantic Asian pirate during British colonial times; an Italian-German-French TV series which broke viewership records across Europe.

For over a year, Kabir starred in The Bold And The Beautiful, the second most-watched television show in the world, seen by over a billion people in 149 countries.

As a stage actor, Kabir has performed Shakespeare’s Othello as well as a mad historical Indian king, "Tughlaq"; and a self-destructive alcoholic in "The Vultures". In London he also starred in "The Far Pavilions", the West End musical adaptation of M. M. Kaye’s novel, at the Shaftesbury Theatre.

Kabir’s extensive roles on American television - primetime and daytime, series and mini-series include Hallmark’s African epic "Forbidden Territory", and Ken Follett’s "On Wings of Eagles" and also "Red Eagle". He played Friar Sands in "The Lost Empire", for NBC. Kabir also played roles on Dynasty, Murder She Wrote, Magnum, P.I., Hunter, Knight Rider and Highlander: The Series amongst others.

Kabir played pivotal roles in Columbia Pictures "The Beast of War", a film on the Russian war in Afghanistan, directed by Kevin Reynolds, as well as the acclaimed Italian film "Andata Ritorno", by Marco Ponti, winner of the prestigious David di Donatello Award..

He is based in India, and lives on Juhu Beach, Mumbai, India.

He is starring in Deepa Mehta's next film, Kamagata Maru with Amitabh Bachchan and John Abraham.

Kabir Bedi is a firm supporter of freedom in Burma and has become an official Ambassador of the Burma Campaign UK.

Personal life
Bedi married three times and has three children, Pooja, Siddarth and Adam. He was married to the late Protima Bedi, an Odissi dancer, and their daughter Pooja Bedi was an actress in Hindi films and now is a magazine/newspaper columnist. Their son Siddarth who went to University in the USA had a long history of schizophrenia and committed suicide in 1997 at the age of 26.

As his marriage with Protima began to break down he famously started a relationship with the late Parveen Babi. They never married. He later married British born fashion designer Susan Humphreys and their son, international model Adam Bedi, made his debut in Bollywood with a thriller, Hello? Kaun Hai!. This marriage ended in divorce.

In the late 1990s, Bedi married TV & radio presenter Nikki Bedi. They had no children and divorced in 2005. Most recently, Bedi has been linked to a London-based woman, Parveen Dusanj.