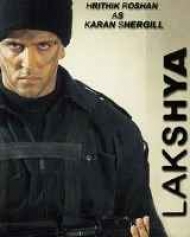 U | War
Release Date : 18 Jun 2004
Cast : Amitabh Bachchan, Hrithik Roshan
Director : Farhan Akhtar
Synopsis
Lakshya movie is about character Karan who is a lazy man, who is good for nothing. He lives on the income generated by his father and elder brother, who run the family business. All Karan does is have fun with his buddies and romance a woman named Romi. When he watches an action movie, he and his friends decide to enlist in the army, but the course proves to be too much of a bother and he abandons it half way, thus making his lose respect on the home front.

Romi also stops respecting him. Now Karan decides that he must re-join the army and show to his family and Romi that he too is focused about path he has to take in this lifetime. But will he be resilient enough to carry out this task?