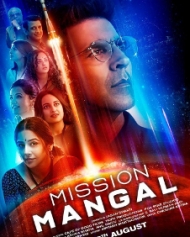 Mission Mangal is a Bollywood thriller-drama, helmed by Jagan Shakti. The movie stars Akshay Kumar, Vidya Balan, Taapsee Pannu and Nithya Menon in the lead roles. The movie showcase how Rakesh Dhawan (Akshay Kumar) and Tara Shinde (Vidya Balan) together with a team of brilliant scientists successfully sent a satellite to Mars in their very first attempt.
Jagan Shakti's 'Mission Mangal' begins with a rocket launch mission which turns out to be unsuccessful under the eyes of one of the project directors Tara (Vidya Balan). However, ISRO scientist Rakesh Dhawan (Akshay Kumar) takes a blame for it. As a result, he is relocated to the Mars Orbitor Mission, which the board is quite confident of not taking off.
However, Tara is struck by an idea while 'frying puris' at home and charts out a plan to use that concept for the visit to the Red Planet. Convinced by it, Rakesh proposes the project to the other ISRO members who initially mock it, but later get convinced. With minuscule budget and tight deadlines, Rakesh and Tara decide to fight all odds and make India proud along with other team members which include Kritika (Taapsee Pannu), Eka (Sonakshi Sinha), Neha (Kirti Kulhari), Varsha (Nithya Menen), Parmeshwar (Sharman Joshi) and Ananth (H.G Dattatreya). All the characters have their own struggles at the home front to deal with along with this professional challenge.
Mission Mangal, produced by Cape of Good Films, Hope Productions and Fox Star Studios, is scheduled to be released on August 15 and will lock horns with John Abraham starrer Batla House.