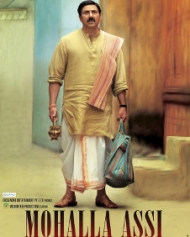 Assi Ghat is a ghat in Varanasi (Banaras) on the banks of Ganges River, and the film is based in a famous and historical 'Mohalla' (locality) by the ghat, on the southern end of Banaras.

Also starring Ravi Kishen and Sakshi Tanwar, the film is set in the post-independence period. Sunny Deol plays the lead role of Sanskrit teacher and an orthodox religious priest (Pundit) while Sakshi Tanwar plays his wife