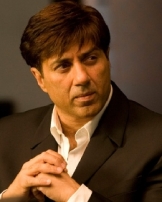 He debuted in the super hit Betaab (1983) and went on to consolidate his status as the nation's foremost and most wanted action hero with films like Arjun (1985), Tridev, Dacait and Ghayal (1990).

It was Ghayal that got him his first Best Actor award and there was no looking back after that. In the film, Sunny's performance was lauded by audiences left, right and centre and to date is considered a benchmark for an intense performance, amongst elite films.

Perhaps one of the only two stars from the 1990s to create long-lasting hysteria amongst millions of fans the world over, his mere presence in a film pulls in the crowds by the horde.

His co-star in the film Bobby Deol, his younger brother also shone through with a brilliant performance. However, Sunny's biggest hit to date, and also Bollywood's all time blockbuster was 2001's Gadar-Ek Prem Katha. The film catapulted Sunny to numero uno status that is yet to be challenged. A strong man to the core, Sunny reflects the aura of legendary heroism that is oh-so missing from the rest of the current stars. Quite simply, the Action King of Bollywood.