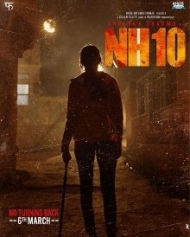 NH10 is a thriller flick directed by Navdeep Singh, movie will features Anushka Sharma and Neil Bhoopalam in the lead role.  It tells the story of a young couple whose road trip goes awry after an encounter with a group of violent criminals.

Meera (Anushka Sharma) and Arjun (Neil Bhoopalam) are professionals living in Gurgaon. When Meera walks out of a party late one night, she gets attacked by a group of unknown men.

Although she escapes through the skin of her teeth, it leaves her traumatised. Arjun, partly blaming himself for not being there that night, tries to make up for it by treating her to a luxurious desert holiday.