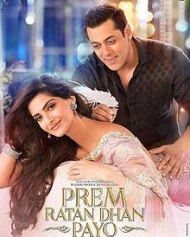 Story in detail:
Yuvraj Vijay Singh (Salman Khan) a prince of Pritampur, is soon to be crowned as king and is engaged to princess Maithili (Sonam Kapoor), but due to his stubborn nature Vijay faces many problems with Maithali as well as his brother and sisters.

His step sisters Rajkumari Chandrika (Swara Bhaskar) and Rajkumari Radhika (Aashika Bhatia) lives in a separate house outside royal fort, while his step brother Yuvraj Ajay Singh (Neil Nitin Mukesh) wants to kill him and take the Crown with the help of his manager Chirag Singh (Armaan Kohli), who is misguiding Ajay at every step.

They plan an attack on Yuvraj Vijay, which Vijay...