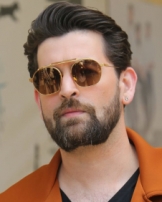 Neil Nitin Mukesh, also known as Neil Mathur, is a Bollywood actor. He is the son of singer Nitin Mukesh and the grandson of the late noted singer Mukesh. Mukesh Chand Mathur is his grandfather and a great playback singer of Indian cinema.

Neil graduated from HR College, with a Bachelors' degree in communications at his father's insistence, he has been very focused on his career since he was in the 12th standard. He did a 4-month workshop with Kishore Namit Kapoor and also at Anupam Kher's institute, during vacations.

He also assisted Aditya Chopra in his movie 'Mujhse Dosti Karoge', when he was in college. Neil did receive offers as a lead actor earlier, but as he did not want to debut with a love story, he chose to wait. Then Sriram offered him a movie - he was impressed with the script, which demanded an ensemble cast.

As a child he made appearances in Vijay (1988) and Jaise Karni Waise Bharni (1989). Neil made his movie debut with the 2007 crime thriller Johnny Gaddaar directed by Sriram Raghavan. He received good reviews for his role of Vikram, the main antagonist. Though the movie did not do well at the box-office, his acting was appreciated.

A reviewer noted that he has made a good move by not being afraid of taking on a negative role.