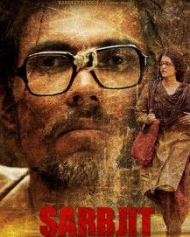 U/A | 2 hrs 36 mins | Biography
Release Date : 20 May 2016
Cast : Aishwarya Rai Bachchan, Randeep Hooda
Director : Omung Kumar
Synopsis
Sarbjit (Sarabjit Biopic) is the story of Sarabjit Singh who was a farmer from Bhikhiwind in Punjab,  who in 1990 while farming was caught on an unmarked Indo-Pakistani border area in Pakistan and arrested by the Pakistan Rangers near Kasur.

He claimed that the arrest was a case of mistaken identity and that he was only a poor farmer who was drunk and had strayed over the border and  and was mistaken to be an Indian spy, had spent 23 years in Pakistan’s jail until his death in captivity.

During his 23 years in jail, his sister Dalbir Kaur, who treated him more like her son than her brother, got to meet him only thrice in jail and made it her life's agenda to get him released.

The film has a very powerful storyline and a very impressive...