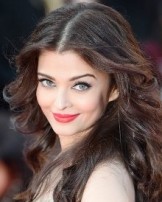 Aishwarya Rai Bachchan is an Indian actress, born on 1 November 1973 in Mangalore, Karnataka.

Aishwarya was born to Krishnaraj Rai and Vrinda Rai. She also has an elder brother, whose name is Aditya Rai who chose his career as an engineer in Merchant Navy. Aditya Rai also co-produced one of Aishwarya's movie, Dil Ka Rishta.

She did her schooling from Arya Vidya Mandir High School in Santa Cruz, Mumbai. She joined Jai Hind College for one year and then she moved to Ruparel College in Matunga to finish her HSC studies.

In 1999, Aishwary started dating with Bollywood actor Salman Khan. Rai cited "abuse (verbal, physical and emotional), infidelity and indignity" on the part of Khan as a reason for ending their relationship, to which Salman denied and said "Its not true that I hit a woman" in a Times of India article in 2009.

Aishwarya then married Abhishek Bachchan in the year 2007. They announced their engagement on 14 January 2007 and then they got married on 20th April 2007. They married according to traditional Hindu rites of the Bunt community to which she belongs. The wedding was held in a private ceremony at the Bachchan residence "Prateeksha" in Juhu, Mumbai.

Before choosing acting as her career, she was a model and became Miss World in 1994. She has acted in more than 40 movies in Hindi, English, Tamil and Bengali.

Her first breakthrough role was in a Tamil movie named Jeans. She made her acting debut in Mani Ratnam's Tamil biopic film Iruvar in the year 1997 opposite Mohonlal. The film was a huge success and won many awards including Best Film award at the Belgrade International Film Festival.

She made her Bollywood debut with Aur Pyaar Ho Gaya which also starred Bobby Deol. It wasn't a success at the box office. The third movie with S. Shankar, Jeans was a commercial success which released in 1998. The film was an official Indian entry to the Oscars for that year.

In 1999, she starred in the movie Hum Dil De Chuke Sanam with Salman Khan and Ajay Devgan. The film became the first box office success in Bollywood for her. She got her first Filmfare Best Actress Award for the role that she played in the film.

Later, in the same year, she was again seen in the film Taal, directed by Subhash Ghai opposite Akshay Khanna. It did average business in India but went on to become a huge success overseas.

Later, again she starred in Mohabbatein in a supporting role with Sharukh khan and Amitabh Bachchan. It was a huge success and became the second highest grosser of the year.

In 2002, she starred in the film Devdas again with Shahrukh Khan. The movie was based on a novel, Devdas written by Sharat Chandra Chattopadhyay. It was a great success on the box office and recived a special screening at the Cannes Film Festival. It became the highest grossing film of the year in both India and overseas.

In the year 2003, she starred in the movie Dil ka Rishta and Kuch Na Kaho. But both didn't do well at the box office. In 2004, she appered in the film Pride and Prejudice which was a Bollywood-style English movie. Later that year for the first time she played a negative role in the film Khakee.

In 2005, she starred in Shabd with Sanjay Dutt and Zayed Khan. It was a flop at the box office. In the year 2006, she starred in another film, The Mistress of Spices which was based on the novel The Mistress of Spices written by Chitra Banerjee Divakaruni. It was also a flop and got some negative review. The same year she made a speical appearance in Bunty aur Babli for a song "Kajra Re" with Amitabh Bachchan and Abhishek Bachchan.

In 2007, she appeared in Guru which was based on Dhirubhai Ambani's real life. It went well at the box office. Later, in the same year, she starred in a film named Provoked which was a flop, though Aishwarya recived positive reviews from critics.

In 2008, she starred in the film Jodhaa Akbar which was based on Mughal Emperor Akbar. It was a success at the box office. Later that year she co-starred with her husband Abhishek Bachchan and father-in-law Amitabh Bachchan in Ram Gopal Verma's Sarkar Raj which was the sequel of Sarkar.

In 2009, she appeared in a Hollywood movie The Pink Panther 2 which was a comedy movie. It fared average at the box office. Later that year, another movie Raavanan starring Abhishek Bachchan came on screen which was a flop, while in Tamil it was a huge hit.