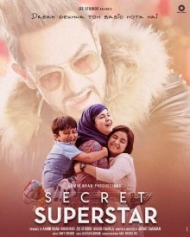 The movie revolves around the life of a 14-year-old Insia (Zaira Wasim), who aspires to be a singer. How she achieves her dream with the help of internet and a pompous music director form the plot of Secret Superstar.

The music for Secret Superstar is composed by Amit Trivedi. The lyrics have been penned by Kausar Munir. Overall, the movie has 6 songs.