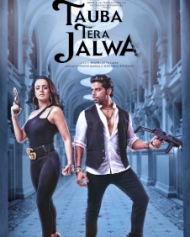 Tauba Tera Jalwa is a romantic thriller helmed by Akashaditya Lama and stars Jatin Khurana and Ameesha Patel in lead roles. Naresh Bansal and  Madanlal Khurana bankrolled this project under the `Shreeram Production and Victorious Enterprises' banner. Vikram Montrose composed the music, while cinematography is held by Shakil Khan.

Uttar Pradesh's real estate tycoon Romi Tyagi, who is  afraid of no one except god and only loves himself.Rinku, a very beautiful girl, who believes in fairy tales and is waiting for her prince charming.But the life of Rinku and Romi is going to change because Laila has entered in between them.Till now whatever  people had heard, seen and known  about love, is going to change.This story has a lots of twist and turns.Many more stories are hidden at every turn.