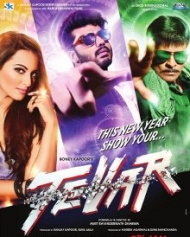 On December 2013, the film was entitled to Tevar and it was revealed that Kapoor will play the role of a regular college kid from Agra, who is a Kabaddi champion.