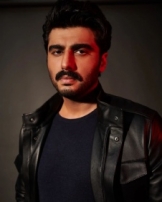 Arjun Kapoor is an Indian actor who appears in Hindi films. He made his acting debut in 2012 with ' Ishaqzaade' alongside Parineeti Chopra. He is one of the talented actors of Bollywood and is also known for his  performances in the movies such as   Kuttey, Namaste England, Half Girlfriend and 2 States .

He has a sister, Anshula Kapoor, and also two half sisters, Jhanvi and Khushi Kapoor.

Arjun Kapoor stepped into the film industry as an assistant director with ' Kal Ho Naa Ho' in 2003. Featured  Shah Rukh Khan, Saif Ali Khan, and Preity Zinta in the lead roles, the film was a super hit at the box office. Later  he worked alongside Salaman Khan with 'No Entry'.While shooting the film, Salman Khan suggested Arjun to do acting. Achieving his dream, he reduced 50 kilograms in weight for his big Bollywood debut. After his successful physical transformation,  he made his first film debut with  Ishaqzaade in 2012.  Directed by Habbib Faisal , the film also marked the debut entry of actress Parineeta Chopra. Following the first film's success, he acted in 'Aurangzeb'.Starred Arjun, Amrita Singh, Jackie Shroff, and Rishi Kapoor in the lead roles, the film was bombed at the box office.

His next film was 'Gunday'. In this film, he shared on-screen space with  Ranveer Singh and Priyanka Chopra. With a stellar cast performance, the film was a super hit at the box office, and the actor gained attention from audiences and critics alike. Later, he played a lead role with '2 States' alongside Alia Bhatt. Based on writer Chetan Bhagat's novel , the film was a commercial hit and collected 100 crores at the box office. His other notable performances in 2014 include Finding Fanny and Tevar.


In 2017, he worked with actress Shraddha  Kapoor with 'Half Girlfriend'.Directed by Mohit Suri, the film also marked author Chetan Bhagat's debut as a film producer. The film was made on a 45 crore budget and declared a flop at the box office. Later, Arjun again shared an on-screen space alongside Pareeniti Chopra in the film 'Namastey England'. Released in 2018, the film received a negative response from audiences, and later, he went on the act in Panipat. On the professional front, Arjun Kapoor was last seen in Kuttey with Tabu, Konkona SenSharma, Naseeruddin Shah, Kumud Mishra, Radhika Madan and Shardul Bhardwaj.