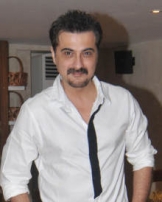 Sanjay Kapoor is an Indian film actor and producer. He starred as Anant Mathur on Dil Sambhal Jaa Zara that aired on Star Plus.

He is the founder and director of Sanjay Kapoor Entertainment Private Limited company with his wife Maheep Sandhu. The debut movie produced by their production house was Tevar.

Sanjay is brother of actor Anil Kapoor and producer Boney Kapoor and is the brother-in-law of actress Sridevi. His sister Reena is married to Sandeep Marwah of Marwah Films & Video Studios and The Asian Academy of Film & Television. He is the son of Surinder Kapoor, who is also a film producer. He is married to an NRI from Perth (Australia), Maheep Sandhu.

He has in the past been romantically linked to Tabu with whom he starred in a movie with as well as Sushmita Sen. He began his career opposite Tabu in the film Prem. It did average business at the box office.

It was Raja opposite Madhuri Dixit that brought him box office success and he became a star overnight. This was followed by many films which flopped or did reasonably well at the box office. Though not as successful as his brother, he has managed to get positive reviews from the critics and audiences.

He has given critically acclaimed performances as a villain playing the obsessive psychotic husband of Esha Deol in Koi Mere Dil Se Poochhe and playing a terrorist in the film Qayamat: City Under Threat.