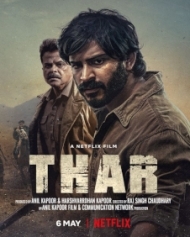 The movie depicts the story of a man who shifted to a big town to seek a job and to avenge his past. Thar is produced by Anil Kapoor and Harshvardhan Kapoor under the banner Anil Kapoor Films & Communication Network. The movie has its music composed by Ajay Jayanthi and editing by Aarti Bajaj.

Set in the dreary village of Munabao (Rajasthan), Thar opens with Anil Kapoor's weary voice recalling an episode from the year 1985. The parched landscape and its inhabitants' humdrum...