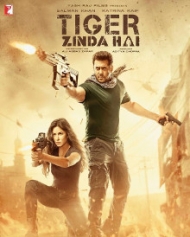 Tiger Zinda Hai is a Bollywood action thriller flick,  directed by Ali Abbas Zafar. The movie stars Salman Khan & Katrina Kaif in the lead roles. The movie is a sequel to Ek Tha Tiger and the second installment of Tiger film series.

The movie is about a group of nurses from Iran, who were abducted and kept in captivity by the terrorist organization IAC. How an Indian agent Tiger (Salman Khan) and a Pakistani spy Zoya (Katrina Kaif) fight against the common enemy, forms the plot of Tiger Zinda Hai.

Unseen Location Stills From The Sets Of Tiger Zinda Hai

The official trailer of Tiger Zinda Hai was released on November 7, which became the world's most liked trailer on YouTube, suppressing the previous best of J. J. Abrams' Star Wars The Force Awakens.

The film was shot in various parts of Abu Dhabi, Austria, Greece and Morocco.