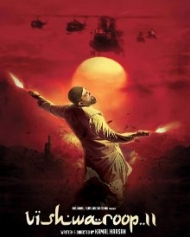 Vishwaroop 2 stars Kamal Haasan in the lead, alongside Rahul Bose, Shekhar Kapur, Pooja Kumar and Andrea Jeremiah. In Vishwaroop 2, Vishwanathan (Kamal Haasan) is on a mission to save New York City from the Al-Qaeda terrorist Omar Qureshi (Rahul Bose) & his Jihadis. The movie begins from where the first part concluded.

The movie has its music done by Ghibran. Vishwaroop 2 is produced under the banner Aascar Films PVT Limited & Raaj Kamal Films International. The cinematography of the movie is done by Sanu Varghese & Shamdat Sainudeen.

The movie is all set to hit...