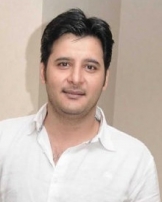 Abbas is an Indian film actor who acts in Tamil films. Born in Calcutta and educated in Bombay, he was discovered during his modelling days in Bangalore by Kathir, who introduced him in Kathal Desam. He has a huge fan following in India.

Abbas has also acted in a number of films as the second hero and has acted alongside many stars including Rajinikanth, Kamal Haasan, Sivaji Ganesan, Ajith, and Madhavan. Since 2003, he has become less engaged in the industry and is running a family-based business in Bangalore, Chennai & Hyderabad. Abbas has also made videos for the hit album "Yeh Hai Prem" (1999). He is married to Erum Ali, a fashion designer.

And not to forget his hairstyle which created a craze among the youth and barbers during the period of 1996-2000, every other teenager wanted to have the "Abbas Cut" back in the times.