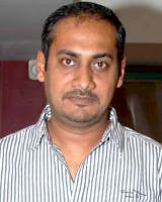 Abhinav Kashyap is an Indian film director and screenwriter.

Before entering the film industry he worked in Indian television serials. In 2000 he was involved in writing the script of the film Jung. He worked as an assistant to film maker Mani Ratnam for the film Yuva (2004). He also wrote dialogues for the films Manorama Six Feet Under (2007) and 13B (2009). He made his debut as a director in the 2010 action film Dabangg, which he also co-wrote, along with Dilip Shukla. Bollywood actor Salman Khan and debutant actress Sonakshi Sinha played the lead roles in the film. Dabangg released on 10 September 2010 and met with success, receiving an all-time blockbuster status. Post the success of his debut venture, he is all set to make a sequel bindaas, proposed to be released in 2012.

He is the younger brother of acclaimed director Anurag Kashyap. He is also an alumnus of The Scindia School, Gwalior and completed his graduation in English Hons from Hansraj College, Univ of Delhi in 1995.