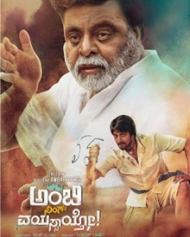 Ambareesh and Suhasini Maniratnam are playing the main lead roles along with Kiccha Sudeep made special appearance in this movie.

Ambareesh (Ambareesh), an ex-stunt man in the film industry, leads a retired life with his well-settled son and his family. Being a livewire by nature, Ambareesh is unable to sit idle at home and hence, ventures out to earn a job for himself to eliminate boredom. It is during this process where he invites a series of troubles to his son, which puts the latter in embarrassing and difficult situations.