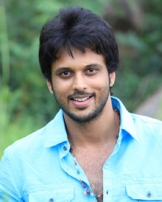 Aadarsh Balakrishna is an Indian actor and cricketer, who predominantly works in Telugu Film Industry.

His father, Balakrishna, is a businessman while his mother Uma is a homemaker. He has a younger sister, Apoorva, who is an architect. Aadarsh stutdied a Sophia High School, Bangalore until Standard 3. His family then moved to Hyderabad where he continued his schooling at Bharatiya Vidya Bhavan Public School and St. Andrews High School. He completed his graduation from Nizam College in 2005–06, majoring in Commerce. He was a cricketer and nurtured an ambition to play for India. He represented Hyderabad in various state level categories and also played for Osmania University.

Aadarsh aspired to become a cricketer as a child and played at state level in his teens. While he was training at St John's Cricket Academy, he was spotted by Nagesh Kukunoor's team, who were on the lookout for a real cricketer to play the role of 'Kamal' opposite Shreyas Talpade and was asked to audition for Iqbal. He was given the role of Kamal, and Iqbal went on to become a critical and commercial success.

It was produced by Subhash Ghai's Mukta Searchlight Films and won a National Award in 2005. Later, Aadarsh got his big break in Tollywood with the movie Happy Days directed by Sekhar Kammula which was a major blockbuster in 2007. He played Sanjay, a senior bully in the movie, set against an engineering college backdrop. His character was a memorable one and he made his mark as a 'Bad Guy' in Tollywood. He was then seen in Vinayakudu (2008) directed by Sai Kiran Avidi and Ride (2009) directed by Ramesh Varma which also went on to become successes at the box office. Aadarsh within a short span worked with directors like Nagesh Kukunoor, Sekhar Kammula, Gopichand Mallineni and Ram Gopal Varma among others. He made his Kannada film debut in Nooru Janmaku where he played the 2nd lead, directed by Nagathihalli Chandrashekhar, a national award winning director. He was seen in the film directed by Krishna Vamsi, titled Govindudu Andarivadele with Ram Charan. Aadarsh also represents the Telugu Warriors in the Celebrity Cricket League and is one of their mainstays.