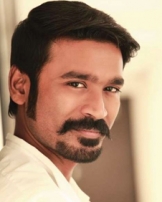 Dhanush is a Tamil actor who was born on July 28, 1984. Venkatesh Prabhu is his birth name. He is the son of director Kasthuri Raja and the younger brother of director Selvaraghavan. He completed his higher secondary education and entered the film field due to his brother's compulsion.

Personal Life
Dhanush was born as Venkatesh Prabhu Kasthuri Raja to Tamil film director and producer Kasthuri Raja. He entered acting after being pressured by his brother, director Selvaraghavan. On November 18, 2004, he married Aishwarya Rajinikanth. He has two sons named Yathra and Linga. The couple announced their separation on January 17, 2022.

Career
Dhanush debuted in the film Thulluvadho Ilamai under the direction of his father, Kasthuri Raja. The film became a big hit all over Tamil Nadu. Then, Dhanush was handled by his brother Selvaraghavan for Kadhal Konden, which was Selva's debut movie, and it earned fame for Dhanush.

Next, Thiruda Thirudi, a commercial movie, also became a blockbuster. Then came his first failure, Pudhukottaiyilirindhu Saravanan, which was directed by Stanley. Then, Sullan's movie also fell into the same category due to his poor physique, and both of these action movies flopped.

Again, he teamed up with his brother for Pudhupettai. Dhanush played the role of a gangster; his body language and acting earned him many fans, but the movie had an average run at the box office. After three years, he achieved commercial success with Thiruvilayadal Arambam. The movie showed the love story of a poor guy and a rich girl in a comic sense.

Parattai Engira Azhagu Sundaram was released, and it became a big disaster in his career. It was a remake of the Kannada movie Jogi. Then came Polladhavan during Deepavali, directed by a debutant named Vetrimaran, which became a hit. He also made a cameo appearance in his father-in-law Rajinikanth's film, "Kuselan." For the second time, he worked with Vetrimaran, and the movie gained positive reviews. Dhanush won the "Best Actor" award in 2011 at the 58th National Awards for the movie Aadukalam.

The movie "3" was directed by his wife, Aishwarya Rajinikanth. The film was a commercial success, and his song "Why This Kolaveri Di" became a YouTube hit, landing him his Hindi debut film, Ranjhanaa. For the first time, he appeared in Bharath Bala's film Mariyaan, a music film by A. R. Rahman.

Other Works
Dhanush occasionally works as a playback singer and lyricist as well, generally in his own films. He was introduced as a playback singer in Pudhukottaiyilirundhu Saravanan by its composer, Yuvan Shankar Raja, and collaborated again with him in his brother Selvaraghavan's directorial, Pudhupettai. He sang further numbers in Selvaraghavan's films, Aayirathil Oruvan and Mayakkam Enna.

The song "Why This Kolaveri Di" from his wife's film 3 was his biggest success.The song became viral on the internet and gained an overwhelming response, earning Dhanush nationwide fame. He had also sung another song, "Kannazhaga," from the same film with his co-star Shruti Haasan.

He was nominated to become the brand ambassador of PETA with the title of "India's Hottest Vegetarian Celebrity of 2011." Dhanush joined hands with WWF India to support Earth Hour 2012. He also started his own production banner, Wunder Bar.