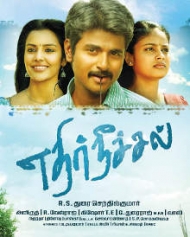 Ethir Neechal is an romance comedy movie Directed by Vetrimaaran's former assistant Senthi features Sivakarthikeyan and Priya Anand in the lead roles. Dhanush and Nayanthara has done guest role in this movie.
The film does not boost of a star cast except the 'Kolaveri di..' singer and Nayantara appearing in a special song. The movie stars Sivakarthikeyan and Priya Anand in the leads. After going through a couple of scripts including a few sent by Dhanush's online followers, the actor locked in the script written by RS Durai Senthilkumar.
With writer himself taking the mantle of direction department, the hunt for the lead stars begun. The team headed by Dhanush roped in Sivakarthikeyan and Priya Anand, who are familiar faces in Tamil films, instead roping newbies to star in the movie. The film was kicked-off on July 23 in Chennai and has been wrapped up in a quick succession. Ethir Neechal has a modern-day story sans cheap comedy, vulgar dialogues or inappropriate scenes.
Nayantara and Dhanush's special number 'Sathiyama ni enakku...' is one of the main attractions of Ethir Neechal. According to the director, it is a soup number, just like 'Kolaveri di...'. It is kind of a love failure song.